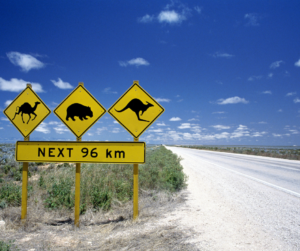 An Australian man once tried to sell New Zealand on eBay.

In Australia, some shopping centres and restaurants play classical music in their car park to deter teenagers from loitering at night.

80% of the animals are unique to Australia. The animals of Australia are some of the most interesting in the world, from cuddly marsupials to a huge variety of birds. There are so many opportunities to experience the wildlife of the country, from zoos and parks to spotting these unique creatures in the wild.

Australia is the biggest island and the smallest continent in the world.

Aussies are the biggest gamblers in the world. Per capita, Australians spend more money on gambling than any other nation, with over 80 percent of Australian adults engage in gambling of some kind. Also, 20 percent of the world’s poker machines are found in Australia.

Each year, Brisbane hosts the world championships of cockroach racing.

Australia is the only continent in the world without an active volcano.

Australia has over 60 separate wine regions. You can’t go to Australia and not try the wine! With such a huge variety of wine regions, it’s hard to choose between them.  The majority of the wine regions are in New South Wales and Victoria so if you fancy discovering a few of them a road trip between Sydney and Melbourne would be a great way to go about it.

The largest Greek population in the world beside Athens in Greece can be found in Melbourne Victoria.

Lifestyle and People of Australia

What are Aussies really like? Australians are very diverse and 26% of them were actually…

Emigrating to Australia - Visas The main visas categories are as follows: working and skilled…

Australia’s health system, Medicare, is one of the best in the world, providing safe and…