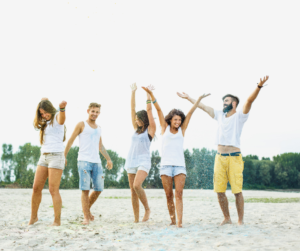 Australians are very diverse and 26% of them were actually born overseas (Europe: UK, Ireland, Asia, Middle East and Africa). They have learned a lot from all immigrants over the past centuries and today they are very tolerant and open-minded and created one of the most successful multicultural societies on earth. Their multi-culturism is reflected in their food, lifestyle and cultural practices.

Australians are usually easy going and very laid-back. You will often hear them saying “no worries mate” or “she’ll be right mate” even if something does not go according to the plan. It’s almost impossible to find a thing that would make them feel negative. On the other hand they have a reputation for being hard workers and they know when it is time to get serious: they do not fuss and get the job done.

They are truly friendly and approachable – if you approach them with a smile and a “G’day, mate” you are one step closer to making a new friend.

Aussies are well known for their specific accent, slang and abbreviations. They shorten many words including people’s names. They talk really fast and it might be challenging to understand them at first. The most popular expressions you should familiarize yourself with, in order to understand Aussies, are as follows:

Australian people are irreverent, and they admire the larrikin (the archetype of a good-hearted person who thumbs their nose at authority and is not afraid to bend the rules). They might come across as being arrogant, enjoying making fun of other people and they are well known for their unique sense of humour that is linked to the irreverence.

Sarcastic, teasing and self-deprecating humour is present in almost all their conversations. Do not be offended if Australian people start making fun of you – it is actually a sign that they like you so you should be pleased. It might sound pretty weird, but you actually do want to be the butt of the joke as it is a sign of affection.

Australia is the fourth happiest country on the planet, making its lifestyle one of the most known and envied in terms of carefree living. No hectic pace from a big metropolis and a perfect balance between work, family, and leisure time. This balance makes it possible to spend a majority of time engaging in outdoor activities rather than on work or deadlines. Whether it’s a barbecue in the sun or a surf in the ocean, Australian culture will surely entertain you and leave you with a smile.

Small things and pleasures rather than some extravagant experiences make Aussies happy: a barbecue with their family, a day out on the beach with their friends, a drink while watching their favourite team playing cricket. They love to put their shrimps, sausages, steaks, fillets, burgers on the Barbie.

Aussies are very loyal and one of their greatest values is “mateship” which is a spirit of loyalty, equality and mutual support. Australian people are always ready to help others voluntarily, especially in difficult times. A mate can be anybody: a spouse, partner, brother, sister, daughter, son or a friend or even a total stranger.

They are obsessed with sports and are very competitive. Many world-class sporting talents in almost all disciplines come from Australia. In the time of the Australian Open tennis and the Formula One Grand Prix you will not find a lot of people on the streets. Australians enjoy both watching and practising sports. Australia is also a rugby nation and there  is great support for their national team, the Wallabies.

An Australian man once tried to sell New Zealand on eBay. In Australia, some shopping…

Emigrating to Australia - Visas The main visas categories are as follows: working and skilled…

Australia’s health system, Medicare, is one of the best in the world, providing safe and…