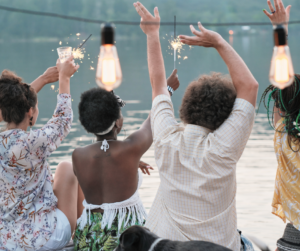 Your Life in New Zealand when you Emigrate

New Zealand is an island country in the Pacific Ocean. The main islands are North (most populated) and South Island which is divided by the Cook strait and the capital is Wellington. NZ is a developed country and is internationally highly rated in terms of quality of life, health, education, protection of civil liberties, and economic freedom.

The New Zealanders are known for their friendliness and gentleness. They dislike loudness and have a more self-effacing and quieter demeanour. Their humour is ironic and self-deprecating. In a land of agriculture where sheep farming is predominant, it is estimated that sheep outnumber people by 1:6. Jokes about this is abundant and is usually met with good humour and eye rolling.

They believe life is for living and balance a good day’s work with time for family and friends.

They are commonly referred to as Kiwi’s, related to the wingless indigenous bird, the Kiwi.

The Population of New Zealand

The population is multi-ethnic with a predominant Western culture, descendant from the original settlers from Europe. The indigenous cultural group are the Maori with their descendance from Polynesia. The Moari culture has a strong influence on the general culture of NZ that can be seen in for example the haka which is performed at the start of all international rugby games, the cuisine and place names. The main official language is English and Maori. The Kiwis are known for their twangy dialect of English. The most familiar being the British “e” that becomes “i”. So, pens become pins, egg becomes igg and Ben will be Bin. Some favourite slang words are:

The country is scenic and has a diverse landscape ranging from sandy beaches, forests, snow clad mountains, rivers, lakes to fjords. The landscape was made famous by being the backdrop for the internationally acclaimed movies ‘The Hobbit” and “Lord of the Rings”. The Kiwis love the outdoors and spend a lot of time partaking in adventurous activities in nature.

New Zealanders enjoy a balanced lifestyle with great career opportunities and plenty of time for recreational activities. Outdoor activities are abundant, including water sports, snow sports, extreme sports, as well as some of the most beautiful walks in the world. The national sport is rugby and as the All Blacks their national team is world famous.

New Zealand has a lively arts and culture scene, with plenty of opportunities to take in musical events, theatre, film and comedy. Kiwis enjoy access to some of the world’s best food and wine, and we’re famous for our good old fashioned kiwi hospitality.

Firstly, don’t panic! When emigrating, everyone goes through the same emotional roller coaster when and…